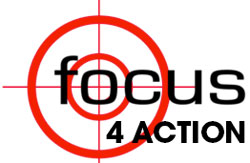 The Democratic Left is pushing the notion that made-made (anthropogenic) carbon dioxide (CO2) from the burning of fossil fuels is heating the climate to the detriment of all life on Earth.  This notion started in the 1960s but greatly expanded later.  Interesting that in the early 1970s, there were some scientists predicting a pending ice age with temperature data like Figure 1.  Personally, I do not recall any ice age occurring after this prediction. 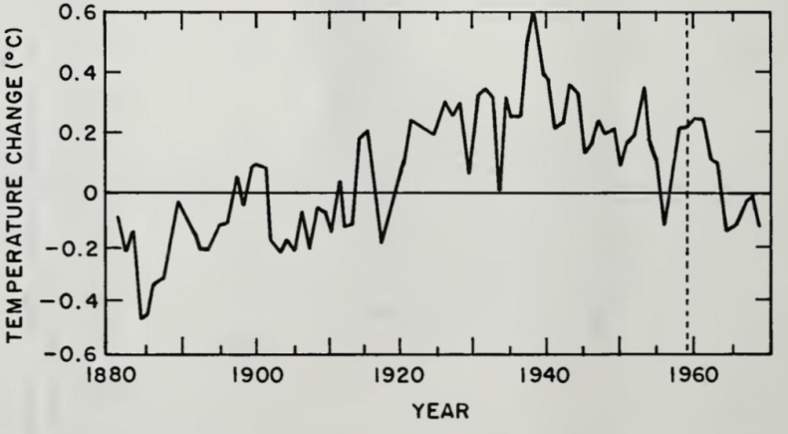 In the April 28, 1975 edition of Newsweek, the article discussed these predictions of a pending ice age.  However, by the later 1970s, more scientists were predicting much warmer temperatures with data and predictions like Figure 2. 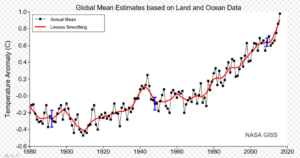 Figure 2. Global Mean Estimates based on Land and Ocean Data

Please note the similarities and differences of the two figures above.

What finalized the man-made climate change hysteria was the “Hockey Stick” graph of average Earth temperature greatly increasing which was presented by Dr. Michael Mann PhD in 1998 shown in Figure 3. 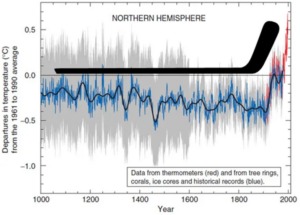 The temperature data and the “scientifically normalized” data (the gray “fuzz”) greatly alarmed the world as these scientists started predicting catastrophic higher temperature climate conditions due to anthropogenic higher levels of carbon dioxide (CO2).  (Please note that the prediction was solely based upon increasing concentration levels of CO2.)  The purpose of my article is to tell you that all this ranges from simply misleading to a purposeful lie.  While addressed in later chapters, the temperature data shown by Dr. Michael Mann is not supported by data from other scientists.  Was Mann’s data falsified or did Mann purposely ignore data that he did not like?  Me simply stating that anthropogenic climate change is a hoax is no different than the Democratic Left stating that it is a “fact”.  The difference is the presentation as to “why”.  Whenever you hear a Democratic politician, someone in the Left-Wing Media, or the supposedly scientific experts claim that man-made climate change is “real”, their only presented evidence is a statement that 97% of all climate scientists believe that it is so.  At best, they show you the photo of a poor stranded polar bear on a small piece of ice.  Conversely, my plan is to provide you with a series of articles explaining the science behind all of this.  I will make it as “down to Earth” as possible and try not to allow it to become too confusing, with lots of technical jargon and explanations.  Certain sections must have some technical information just to explain the “larger picture”.

The man-made climate change debate is critical during our pending election cycle.  Democrats want you to abandon the use of fossil fuels as an energy source.  Instead, Democrats are promoting renewable energy sources that do not give off carbon dioxide.  While maybe a noble goal, our economy and our lives currently depend upon fossil fuels.  Democrats want you to only drive electric vehicles, but that does not explain how that electricity is generated.  Democrats want you to stop using air travel, but these politicians fly around in private jets.  Democrats are using scare tactics to convince you by saying that unless we act right now, we only have 12 years left before the damage to the Earth will be irreversible.  Take for example Greta Thumberg, the 16-year-old climate activist from Sweden, who spoke to the United Nations on September 19, 2019 about the pending calamity of man-made climate change.  She was honestly terrified and angry about her and her generation having no future if the world fails to act right now!  When I heard her speech, I felt sorry for her.  Her panic was real, but her facts are not.  She has been duped into believing that the world will end in 12 years.  Her happy childhood has been stolen from her by those on the Left that are using her as a “useful tool” to promote their political agenda.  Sadly, thanks to years of public schooling lead by the Liberal Left, millions of young people believe in this anthropogenic climate change apocalypse.

Right now, Democrats, like Alexandria Ocasio-Cortez (commonly known as AOC), are pushing the “Green New Deal” to combat man-made climate change for a “modest” estimated cost of 51–93 Trillion dollars over a decade.  That comes to only $600,000 per American household.  If you object only to the cost, then how do you put a price on your life and your family’s life?  The only sound argument against the Green New Deal is to debunk the underlying notion and the “science”.  I am at a loss to understand why Conservative Republicans are not debating Democrats on the issue of man-made climate change. For Greta, for all her generation, and for everyone that has been led to believe in the so-called pending apocalypse caused by man-made carbon dioxide, I am committed to share with all of you as to how I know that anthropogenic  CO2 is not something to be overly concerned.  If nothing else, my goal in this series is to encourage you to question whatever someone is trying to convince you.  Dig deeper into the facts and do not be bamboozled by some “expert” that may have a hidden agenda.  This warning includes even me.  As such, everything I mention in this series of articles can be verified.  If I offer an opinion, it should be obvious that it is only an opinion.