Chapter 6a – The Earth’s Heating and Ventilation System

The simplest explanation to start is that we all know that warm air rises.  Hot air balloons rise when the air inside the balloon is heated.  This air expands due to the heating.  When it expands, the air inside the balloon becomes less dense.  The cooler external air then forces the balloon up.  This same thing causes ice to float, because ice is less dense than liquid water.  In terms of weather, warming produces a low air pressure area where the hot ground has heated the air.  Since every natural system on Earth works to equalize differences, cooler air blows in to fill the low-pressure area.  Everything from now on will be more complex but I will attempt to keep it simple.  Just remember this one important fact:  nature does not like diversity in temperature, pressure, salinity, nearly everything.  As such, nature takes automatic and natural steps to equalize or balance everything that it can.  At its disposal, the Earth has atmospheric circulation and ocean currents to move heat around the globe.  Around 60% of the sun’s energy is redistributed by atmospheric circulation and around 40% by ocean currents.  All this movement causes changes in weather.

Warm moist air rises along the equator where the solar radiation is the strongest.  As it rises, it is cooled and pushed out of the way by warmer moist air still rising.  As the air cools, it becomes denser and falls.  This rising and falling creates 3 circular patterns of air flow between the equator and the poles.  These patterns are called the Hadley Cell, the Ferrel Cell, and the Polar Cell as can be seen in Figure 14.

Just to make sure that everyone is aware as to what direction the Earth spins, Figure 15 is a view showing why the sun seems to rise in the east and sets in the west.  As shown in Figure 14, the air flow patterns in the Hadley Cell, the Ferrel Cell, and Polar Cell are predominately a north/south flow.  Due to the motion of the Earth, air flow in the Hadley Cell lags behind the spinning Earth to appear moving westerly when it is trying to move north to south along the Earth surface. 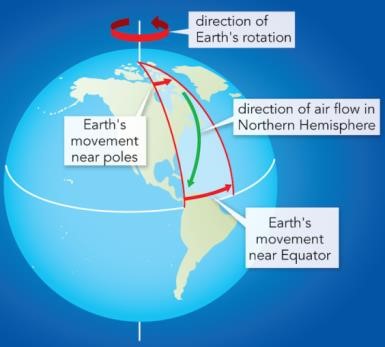 Figure 16 is a 3-dimensional view of air flow due to the rotation of the Earth. Between the westerly flowing Hadley Cells and the easterly flowing Ferrel Cell, there is very turbulent air called the Subtropical Jet Stream.  Likewise, between the easterly flowing Ferrel Cell and the westerly flowing Polar Cell, there is the Polar Jet Stream.  These are shown in Figure 17. Those of us in the US are familiar with this jet stream if you have ever flown.  If you have a jet stream pushing you, you get to your destination sooner.  Pilots try to find an east to west path that does not put them flying into the jet stream to avoid any delays. 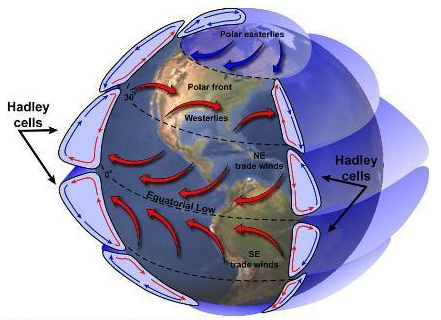 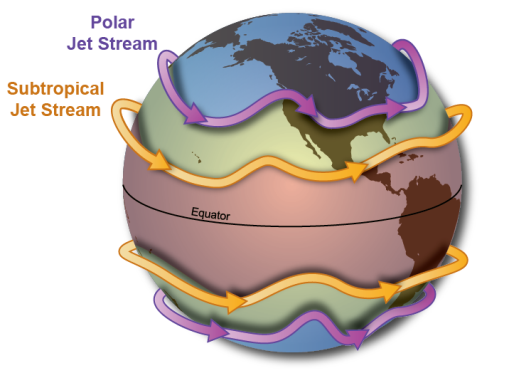 While the Hadley, Ferrel, and Polar Cells follow a set pattern producing the two different jet streams, the boundary of the cells and the path of the jet streams can vary widely.  A warm day in the US Midwest can turn very cold the next day just because the jet stream path changed bringing cold Arctic air with it.  However, all of this is natural and not affected at all by CO2.

The established patterns of winds bring moisture from ocean evaporation onto the dry lands to fall as rain.  Where high mountains exist, this moist air is forced to a higher elevation which cools it such that it cannot contain the same moisture level.  This causes more rain to fall on the ocean side of the mountain and creates a “rain shadow” on the opposite side of the mountain where little rain falls.  The Sierra Nevada mountain range on the eastern side of California is the source of water for California, but it keeps Nevada from getting hardly any rain.

As previously noted, the cooler air from the Hadley cell and the Ferrel Cell fall back to the surface at the 30th latitude.  This colder air has lost all its original moisture when it rose in altitude at the equator.  If you look at a globe, all the great deserts in the world occur near the 30th North or South latitude.

Santa Ana and Diablo winds that generally occur in autumn, originate from cool, extremely dry high-pressure air over the Great Basin (all of Nevada, much of Oregon and Utah, and portions of California, Idaho, and Wyoming, as shown in Figure 18). They flow east to west into a very low-pressure area over the ocean off California.  These Santa Ana winds are extremely high velocity winds (easily exceeding 40 mph) that have been heated by the ground as they flow west.  Santa Ana winds can rapidly spread any fire started by any means.  These Santa Ana conditions have existed over 5,000 years, and were known to the Native Americans that inhabited this area.  Also, these Santa Ana winds existed long before humans occupied this section of North America.  Any fires spread (but not caused) by Santa Ana winds can be extremely destructive including to any man-made structures.  However, these Santa Ana winds are part of the normal ecology of this region.  While destructive, there is a benefit that comes with Santa Ana winds.  These strong winds push the upper level of the ocean westward allowing for upwelling of nutrient rich colder water which is good for the fisheries off California. 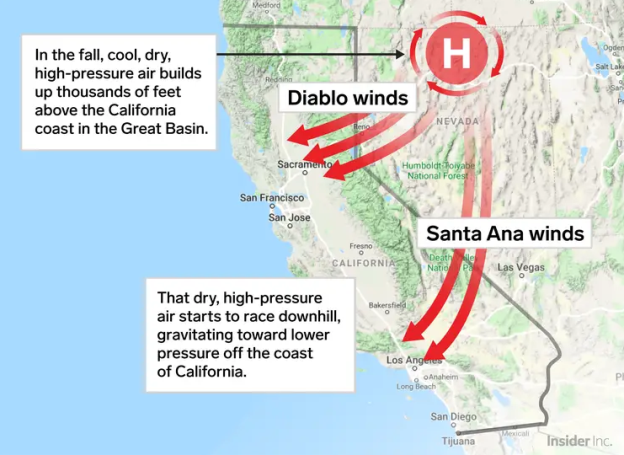