As noted in chapter 3, science indicates that the TSI (Total Solar Irradiance) of 340 W/m2 (watts per square meter) is the average level of solar radiation (sun’s energy) reaching the top surface of the Earth’s atmosphere.  As the saying goes, a picture is worth a thousand words.  Figure 13 is a depiction of the Earth’s energy balance from NASA. 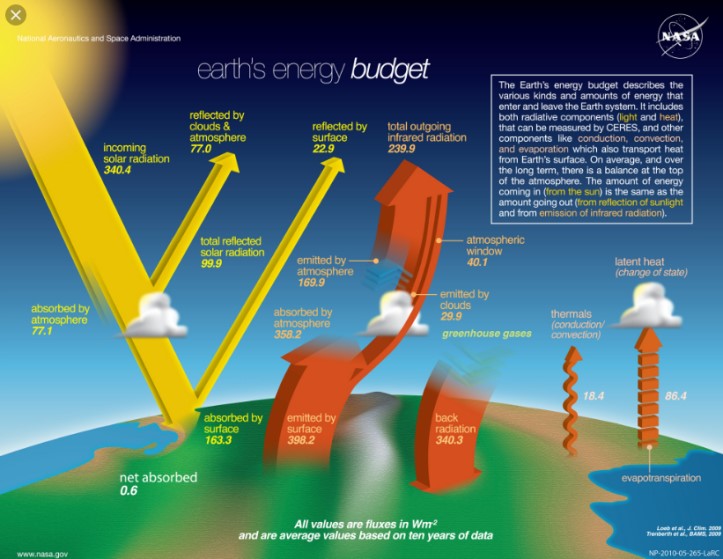 This energy balance depiction is complicated mainly because of a closed loop feedback back system where energy is bounced around a bit between the ground and the atmosphere.   Eventually, the original 340 W/m2 are radiated back into space leaving a net balance of approximately 0 W/m2.  The most important aspect of this chart is that the Earth used the sun’s energy, bounced it around a bit between the ground and the atmosphere (keeping us warm at night), but eventually allowed it to escape back into space.  Without any greenhouse gases, the Earth would freeze at night.  The Left loves to demonize carbon dioxide, as a greenhouse gas, saying that increasing levels of CO2 is going to kill all life on Earth.  Instead, CO2 is keeping life from freezing at night.

I would also like to add a comment about all the numbers mentioned in this chapter.  There is a lot of debate among scientists as to each of these specific numbers.  NASA uses 340.4 W/m2.  If one looks at different sources, there will likely be other differences.  Whatever the differences of opinion/data are, the conclusions will be the same.  Energy in equals energy out with the additional benefit of some energy bouncing around a bit at night.

For completeness, I have two additional thoughts to convey.  Albedo is the property defining how much energy is reflected off something.  Albedo can cause large differences in reflective energy numbers.  Something that is pitch black would have an albedo of zero (reflecting nothing and absorbing everything).  A mirror would have an albedo of 100% (reflecting everything and absorbing nothing).  Fresh fallen snow would have an albedo of 80% to 90%.  Desert sands might have an albedo of 40%.  A forest might have an albedo of roughly 15%.  I am mentioning this to say that all the reflective energy numbers used above are a property of the albedo.  Think about what happens to the energy balance after fresh snow fall.  It changes with more energy being reflected into space and less being absorbed by the Earth.  How about large concrete cities replacing forests or grasslands?  There will be a shift of energy balances because the albedo has changed.  These types of changes due to man-made development (clearing grasslands/forests and replacing it with concrete/asphalt) can have a larger effect on the climate than carbon dioxide per some of these man-made climate change models.

In summary, life on Earth depends upon the solar radiation affecting the Earth.  Some of that thermal energy is immediately bounced back into space.  Some of that energy makes it to the surface of the Earth, warming it.  A lot of this thermal energy is bounced around between the atmosphere and the surface.  This aspect is the only thing that keeps us warm at night.  Without it, life could not exist on Earth.  How much of this energy is bounced around is dependent upon the ground’s albedo and the greenhouse gases (water vapor and CO2).  With water vapor having the most significance, the amount and type of clouds have a significant impact.  This will be addressed more in the next chapter.