If we do not count periods when the Earth’s molten rock escapes to the surface with volcanoes, the sun is our only source of heat for us on the Earth’s surface.  The question to be addressed in this chapter is whether this heat is constant.

Let me start with an analogy.  Anyone that has ever gone camping and sat around a campfire understands the basics.  After you built your fire and set up your chair at a comfortable distance from the fire for just the perfect temperature, the fire starts to burn down.  At first, you move your chair closer to the fire.  Finally, after someone puts more wood on the fire, the flames flare up forcing you to move your chair farther way from the fire to be comfortable.  The sun is just like that campfire, but we do not get to control where our chair is placed.

First, the sun does not give off a constant source of “heat”.  It varies with time, including its 11-year solar cycle.  The sun is not a solid object.  It is a gaseous mass in constant internal motion.  Occasionally, “solar flares” send out massive amounts of solar material 30,000 miles or more out from the sun’s surface.  There are also sunspots that appear as dark spots on the surface of the sun.  On an average, the sun’s energy level, after travelling about 93 million miles, and first reaching the top stratosphere of our Earth’s atmosphere (about 40 miles above the ground) is 1,361 watts per square meter (W/m2).  (Just as a reference, watts are how you measure the effectiveness of your electric heater.   Think about when you put air into your tires, you add air until the pressure reaches the acceptable level of psi – pounds of force per square inch.  The number above is similar in nature to your tire pressure – some force acting upon a flat square surface area.  The only difference is the type of “force”, pressure or watts, and the units of measure, inches or meters.)  The 1,361 W/m2 is based on a flat surface perpendicular to the sun’s rays. Since the Earth is spherical, the sun’s energy is calculated for the curved area of the Earth. They call this number above the Total Solar Irradiance (TSI).  An average of 340 W/m2 is typically used.  The actual energy is higher at the equator and lower at the poles and varies by season. During the maximum solar output of the sun during sunspot activity, the energy level from the sun increases by 0.07%.  (For perspective, please note the comparison of sun energy varying by 0.07% for an 11-year cycle while CO2 has recently varied by 0.01% after several decades.)  So, by going back to my campfire analogy, our campfire changes over time but not by very much.  Let’s examine the chair spacing to the fire analogy in the next paragraph.

The Earth revolves around the sun as shown in Figure 6.  However, the path of the Earth around the sun varies over time from a nearly circular path (slightly an ellipse) to a far more elliptical path.  Additionally, the Earth’s axial tilt and “wobble” as it spins on its axis all vary over time.  Collectively, the total effect of these variations creates alterations in the seasonality and severity of solar radiation reaching the Earth’s surface.  These are called the Milankovitch Cycle.

Figure 6. Earth’s Path Around the Sun

The Earth’s 1-year orbit around the sun is constantly changing within a cycle of around 100,000 years.  When the orbit is almost circular (only slightly elliptical), Figure 7, the distance from the Earth to the sun ranges from 91 to 94.5 million miles for one year.  When the Earth’s orbit is at its most elliptical path (100,000 years later), also Figure 7, the distance from the Earth to the sun ranges from 80 million miles at its closest point to 116 million miles at its farthest point during a one-year period.  That difference in distance has a significant change in the amount of solar radiation (TSI) that reaches the Earth.  Instead of around 340 W/m2 constant heating during an almost circular Earth orbit, solar heating ranges from 395 W/m2 (a 16% increase) at the closest distance to the sun to only 272 W/m2 (a 20% reduction) at the farthest distance to the sun for a full elliptical orbit.   During a nearly circular orbit, the angular velocity of the Earth around the sun is almost constant.  However, during a more elliptical orbit around the sun, the Earth’s angular velocity speeds up near the sun, but slows down farther from the sun.  The total time around the sun remains constant at 1 solar year.  That means that the higher solar heating of 395 W/m2 does not last very long, but the lower solar heating of 272 W/m2 lasts much longer.   Geologists tell us that there is evidence of major ice ages across the Earth that occurs about every 100,000 years.  Everything just mentioned above explains why this is so.  It has occurred since the beginning of time (for the Earth) and will forever continue.  Just to reference back to my campfire analogy, we learned that the campfire remains relatively constant (0.07%).  However, our chair location from the campfire is constantly changing over a 100,000-year cycle.  If one got to decide when you are born, it would be better to be born at a time when the Earth’s orbit is nearly circular.  Keep in mind however, our ancient ancestors survived ice ages without modern technology when the Earth’s orbit was at its most elliptical. 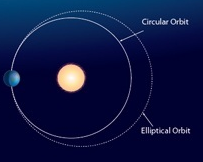 Figure 7. Near Circular vs Elliptical Orbits

At the end of chapter 2, there was a chart of CO2 concentration and Earth temperature over an 800,000-year period (Figure 5).  All the low temperature time periods are about 100,000 years apart.  This represents known Ice Ages on Earth due the Earth’s orbit being elliptical (Eccentricity).  Obliquity and Precession cause “ripples” in the Eccentricity wave pattern as shown in Figure 8. When man-made climate change scientists evaluate the contribution of carbon dioxide variability, they ignore the variation of orbital mechanics which is six times the value of carbon dioxide variability as a greenhouse gas.

In terms of the Earth’s tilt (Obliquity) and wobble (Precession), this also affects the sun’s energy distribution over the surface of the Earth.  During the summer, the northern hemisphere receives more heating.  Conversely, during the same summer months, the southern hemisphere receives less heating.  Obliquity (tilt) varies from an angle of 22.10 to 24.50 over a cycle of 41,000 years.  Currently, the tilt is 23.50.  If there were no tilt at all, then there would be no change of seasons.  Any given spot on Earth would receive the same amount of solar radiation every day of the year.  Since the Earth does have a change of tilt over the 41,000 years previously mentioned, there is a change of severity of the seasons.  With the smaller tilt, solar radiation is more evenly distributed between summer and winter.  With the larger tilt, solar radiation is less distributed causing more severe summers and winters.  During the equinoxes (March and September), it is that transition between summer and winter such that there is effectively no tilt with respect to the sun.

Precession is the slow wobble as the Earth spins on its axis.  Because the Earth is not a sphere (radius of the Earth from the center to the equator is 13 miles greater than the center to either pole), non-uniform gravitational forces of the sun and moon causes the Earth to wobble over a 26,000-year cycle.  Currently, the North Star is Polaris.  In 13,000 years, this wobble will cause the Earth axis to point to the star Vega, which will become the new North Star.  During this period, winters will be colder, and summers will be warmer.  Then 13,000 years later, Polaris will once again be the North Star. 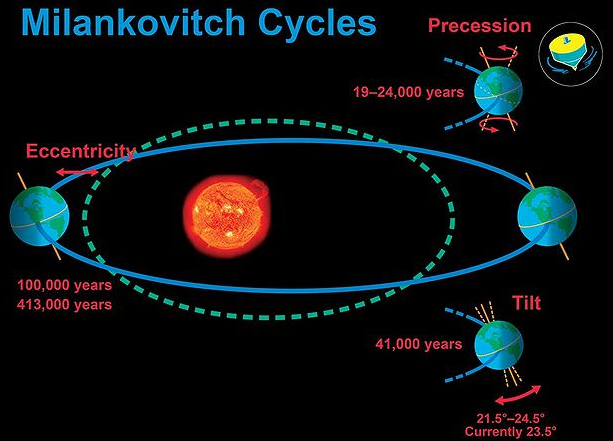 There is one final orbital variation that affects climate.  That is Nutation, which is the rocking and swaying motion in the axis of Earth rotation caused by the gravitational forces of the sun and moon.  During Precession (wobble), Nutation causes a small change to the tilt angle (Obliquity) which causes a relatively short-term disturbance to the seasons and tidal behavior over an 18.6-year cycle.  In 2006, the tidal changes brought large volumes of warmer water into the Arctic which melted polar ice at a faster rate.  This was the beginning of the current hysteria of man-made carbon dioxide warming the planet, even though this was not due to carbon dioxide at all.  As noted here, it was simply an unusual but regular natural occurrence due to orbital mechanics.  All of this will likely happen again in 2024.

Figure 9 shows the interaction of the three Milankovitch cycles. 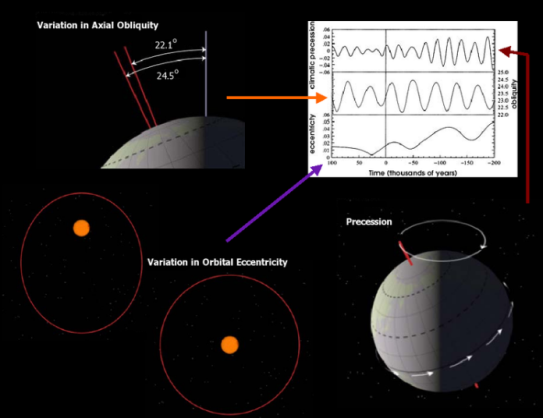 The chart in the upper corner is enlarged in Figure 10 with the past starting on the right side of the graph. 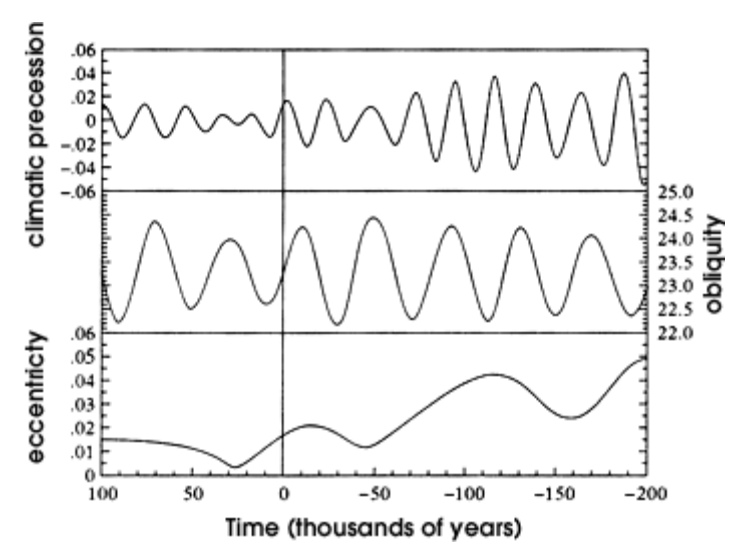 The result of these 3 Milankovitch cycles in terms of Earth’s temperature is shown in Figure 11.

Figure 11. Glacial-Interglacial Cycles Over the Past 450,000 Years

Let’s recap what we have learned in this chapter.  We learned that the sun is not a constant temperature, but that variation is not significant.  We learned that the Earth’s orbit around the sun is highly variable in regular cycles between a near circular orbit to an elliptical orbit.  This natural change results in significant heating differences for the Earth due to differences in the distances between the sun and the Earth.  We learned that the Earth’s rotation about its own axis is naturally variable which is also significant in terms of how much heat distribution there is across the surface of the Earth. We learned that all of this can lead to significant differences in climate for the Earth and none of it is associated at all with carbon dioxide.  For completeness, I must add one caveat regarding the influence of the Milankovitch cycle.  While accurate in proposing how orbital mechanics can affect the climate, the timing of these events compared to the reconstructed (what paleontologist believe it was) paleo-temperatures does not match up 100%.  There is something else going on as well which is not fully understood.  Currently, this is a problem for the Milankovitch cycle explanation or what the paleontologists believes.

We have we learned that

For anyone wanting more info on Milankovitch cycles, the following is a good link to a discussion:  http://www.stableclimate.org/milankovitch-cycles

I did not give a discussion of volcanoes its own chapter, but I did wish to mention the impact of volcanos.  As previously mentioned, volcanoes can be a source of heat to the atmosphere or to the oceans.  In fact, 85% of are underwater.  It is also known that when volcanic rocks cool, they release monstrous amounts of CO2 and other gases.  Climate scientist generally account for this released CO2, but only from the visible 15% of volcanoes above water.  They ignore the impact of 85% of the volcanoes including the CO2 released underwater.  It is also known that CO2 in the oceans is released into the atmosphere.  Instead of blaming all CO2 emission on the burning of fossil fuels, shouldn’t they also consider volcanos, both above and below the water?