Greta Thumberg, other man-made climate change activists, Democratic politicians, and all Liberal Media “talking heads” tell us that man-made climate change is real and the effects will be irreversible in 12 years if we do not act (spend money) right now.  Where do they get this information since all of them know little or nothing about science?

The Intergovernmental Panel on Climate Change (IPCC) is an intergovernmental body of the United Nations established in 1988 by the World Meteorological Organization (WMO).  The IPCC “stimulates” research in climate science with grant money.  The IPCC also monitors all work on climate research.  Ultimately, they summarize all the relevant research that they approve and capture that in reports containing a “Summary for Policymakers”.

To answer the above question, every Liberal/Progressive on Earth gets the information about man-made climate change killing the Earth from the bureaucrats in the IPCC.  What could possibly go wrong with that?

So, where do the IPCC bureaucrats get their information?

The IPCC provides grant money to climate scientists that will generate climate data and projections that the IPCC wants.  The IPCC monitors all research in this field but selectively picks and choses the desirable research, thus they bias the results.  The approved research is then selectively summarized into a final report that is then published for all the bureaucrats providing funding to the IPCC.   These same reports are then made available to the Media.

If you graduated with a PhD in climate science, where do you get a job to support yourself?  One could go work for a major corporation and do what they want.  You could teach and do your own scientific research as long as the college was OK with that.  You could solicit grant money to do the research that you wanted.  What if however, most of the grant money available had “strings attached”?

So, let me summarize how this works:

Just as an example to item 4 above, one scientific reviewer who had their comments included in an IPCC Summary for Policy Makers was dismayed to see that their critical comment was deleted from the IPCC report which dramatically changed their conclusion.  That deleted comment was:

“None of the studies cited above has shown clear evidence that we can attribute the observed climate changes to the specific cause of increases in greenhouse gases.”

Let’s discuss the possible corruption of the summary reports starting with the originating data.

Remember Dr. Michael Mann’s “Hockey Stick” graph of Earth temperature that so greatly alarmed the world due to the significant temperature spike starting since the 1990s? 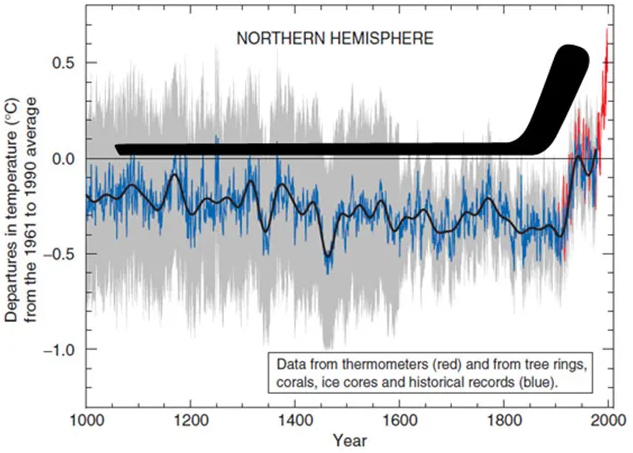 How does Dr. Mann’s graph (Figure 3 and repeated above) compare to a graph of temperatures as determined by historical (documented) data shown in Figure 35?

Figure 35. The Medieval Warm Period and the Little Ice Age

In Figure 35, there are written records indicating that Vikings were able to colonize Newfoundland and Greenland and grow crops including grapes.  Currently, vineyards cannot grow in these locations due to the cold.  There is identical written evidence for northern England as well.  For this to have happened, it would have had to be warmer in the year 1200 than in 2020.  But that information does not match the “Hockey Stick” temperature chart.  Somebody is not telling the truth.  Personally, I believe the archeologist and historians.

Here are three more temperature charts (Figure 36 through Figure 38) going back even farther from different authors.  None of these four charts matches Dr. Mann’s chart, which is solely used by the man-made climate change believers.  If you wanted to convince the world that the Earth is getting hotter due to recent increases in man-made CO2 concentrations, which chart would you show? 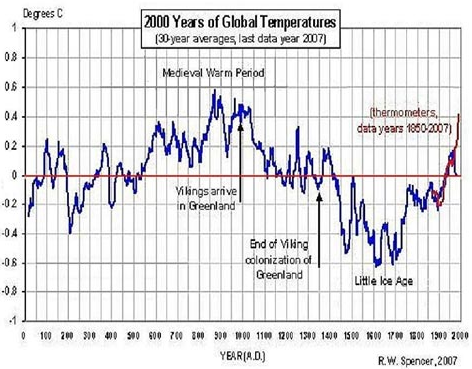 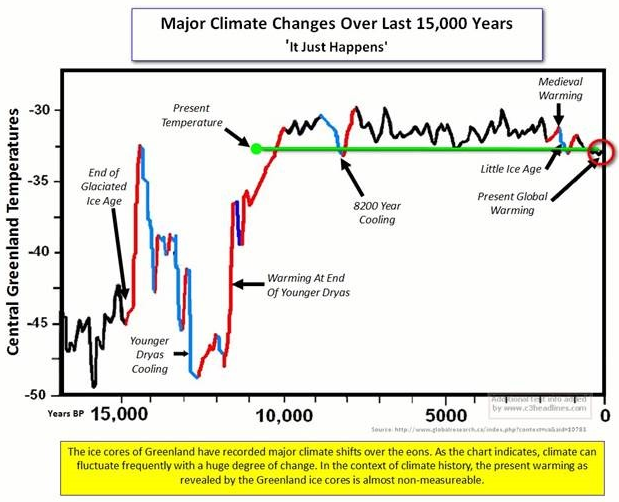 The Climate Research Unit (CRU) at the University of East Anglia (in Norwich, England) became the center hub of all climate research.  Essentially, the CRU and the IPCC are one in the same.  In November of 2009, someone “hacked” into the CRU computers and released a thousand emails between researchers, the CRU administration and the IPCC.  This controversy became known as “Climategate” for the obvious implication of what happened to President Nixon.  Books have been written as to what the general public learned from these first leaked emails and the 220,000 later emails released on March 13, 2013.  The following is just a summary of the climate change corruption that had occurred:

Allow me to provide some very interesting quotes from the IPCC that may help to resolve this discrepancy.

“Isn’t the only hope for the planet that the industrialized nations collapse?  Isn’t it our responsibility to bring that about?”

Christine Stewart, Canadian Minister of the Environment from 1977 to 1999 said:

“No matter if the science is all phony, there are collateral environmental benefits… Climate change provides the greatest chance to bring about justice and equality in the world.”

“The urge to save humanity is almost always only a false face for the urge to rule it.”

The supposedly scientific studies indicating that anthropogenic CO2 is causing global warming comes from the IPCC and is biased.  The IPCC provides grant money to those willing to produce the desired data.  The IPCC handpicked scientific papers and data favorable to their position. Only this selected information is included in a summary report that is finally handed out to politicians, bureaucrats and the Media.  Climate scientists that disagree with the IPCC are attacked, ridiculed, and the IPCC works to suppress any results that do not support man-made climate change.  A “whistleblower” showed us that there has been extensive corruption in climate science to promote any research that supports man-made climate change and to suppress research indicating the opposite fact.  Leaked moments of honesty by those involved in this corruption indicate that everything that they do has nothing to do with climate change environmentalism.  It is all about wealth redistribution.